Loessfest is an annual celebration of the all of the great things happening in Council Bluffs, as well as our unique landscape. Due to the recent Missouri River flooding, the current condition of the Tom Hanafan River’s Edge Park, and this summer’s projected Missouri River levels, officials from the City of Council Bluffs and the Iowa West Foundation have canceled Loessfest.

Established in 2013, Loessfest kicks off the summer season beginning Memorial Day weekend and offers a wide array of free events with something for everyone to enjoy.

The grand opening concert performance for Loessfest, as well as the newly completed and dedicated Tom Hanafan River’s Edge Park, was The Beach Boys. The park’s Great Lawn was filled front to back with an estimated 17,000 people of all ages listening, dancing, singing along and cheering while “America’s band” worked through their playlist of countless hits. The heartland’s own Mulberry Lane opened the show.

In addition, the 2013 event line-up included: the Omaha Symphony and Fireworks, Playing with Fire concert, Food Truck Festival, several Movies in the Park nights, Rumble on the River youth soccer tournament, Bluffs Bash family festival, a performance by the Preservation Hall Jazz Band, and the launch of the permanent exhibit Rays, an interactive light environment by artist Dan Corson that is part of the Iowa West Public Art collection.

Loessfest 2014 came back strong with our Three Times the Fun Concert featuring Three Dog Night, The Guess Who and Loverboy; as well as Fireworks for Freedom and the Omaha Symphony, Movies in the Park, Xtreme Obstacle Challenge, Bike the Bluffs, GolfFest, Semi-Pro Football Kicks It at the River, and Disney Day featuring The Official Stand Up Tour.

In our first two years, Loessfest had drawn more than 66,000 people from all over the region to our riverfront.

Loessfest 2015 featured eight days of free events, including a first-time collaboration with Taste of Omaha and the Maha Music Festival, attracting tens of thousands of people to the Riverfront. In 2015, our headliner to kick off Loessfest was Chicago, the first American rock band to chart Top 40 albums in six different decades. It was estimated nearly 40,000 visited Tom Hanafan River’s Edge Park in 2015 for Loessfest events.

The first three years of Loessfest drew more than 100,000 people to Tom Hanafan River’s Edge Park. In 2016, our fourth year drew nearly 32,000 more people to the park with a week’s worth of free events, beginning with a free concert by headliner Kool & the Gang.

In 2017, our fifth year of Loessfest, began with a free concert headlined by KC and the Sunshine Band, all events happened over Memorial Day weekend, promising to be a weekend full of fun for the whole family.

Loessfest featured Frankie Valli and the Four Seasons in 2018.

In 2019, due to the recent Missouri River flooding, officials from the City of Council Bluffs and the Iowa West Foundation have canceled Loessfest 2019.

Loessfest celebrates Council Bluffs and all it has to offer — including our defining geological feature, the Loess Hills. These hills nest the city and provide it with immediate access to wildlife, unique natural environments and beautiful views in all directions.

Formed between 24,000 and 14,000 years ago, the Loess Hills (pronounced “luss”) were formed from silt blown in from the floodplain of the Missouri River. They appear as an angular band of rugged, prairie-topped hills rising up from the flat river bottomland, continuing along the western edge of Iowa into northwest Missouri, and are only found in a few locations around the world.

The hub of Loessfest activities, Tom Hanafan River’s Edge Park is an 85-acre preserve and recreational area located at the foot of the Iowa side of the Bob Kerrey Pedestrian Bridge, stretching both north and south along the Missouri River.

Designed to offer recreation and entertainment in a simple but grand public open space, the park’s centerpiece is the five-acre Great Lawn. The park also has an amphitheater to accommodate up to 1,100 people.

Tom Hanafan River’s Edge Park also protects the river’s riparian woodland and wetlands by preserving much of the park in its natural condition. It is designed so that if flooding occurs, water will drain away naturally. 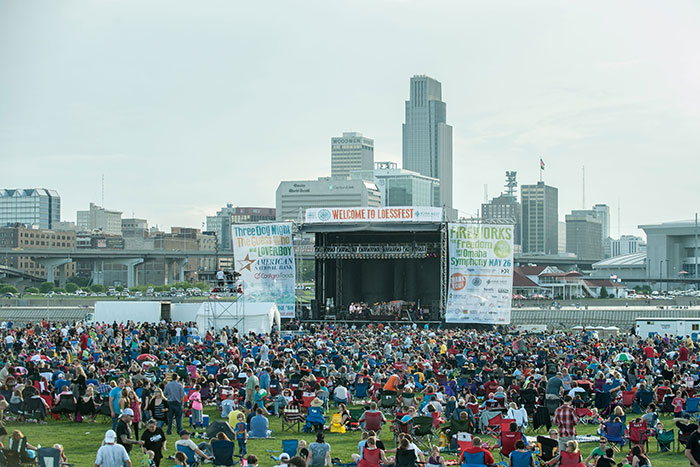